Female Representation in the Workplace and Society 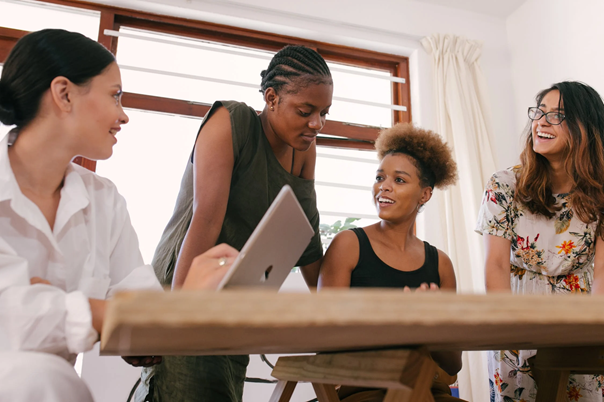 Beyond the short- and medium-term objectives to achieve a more equitable representation between men and women in power and leadership, thinking about women’s governance should always bring us back to the original goals of women’s movements, that is gender equality. Often, women are categorised as a subordinate group as established by the society.

Gender equality constitutes the foundation of a just, prosperous, socially inclusive and durable world. The gap between women and men in nearly every field is considerable. Women must win greater obstacles than their male counterparts to access productive resources, services, technologies, to market information and sources of funding. They are under-represented in institutions and in the government at all levels, and generally have less decision-making power. Apart from these constraints, established standards and gender discrimination often require women to have the same workload as men and their jobs are not remunerated at the same rate, and ultimately not acknowledged in the same way. Therefore, there is an urgent need to tackle the many obstacles facing women in labour markets, in order to avoid the trap of poorly paid informal jobs.

On the other hand, in examining the labour market, post the pandemic, women are particularly vulnerable to economic impacts related to COVID-19 due to existing gender inequalities, revealed a recent report by Mckinsey. According to the projections, women’s jobs are 1.8 times more vulnerable to this crisis than men’s jobs. Women make up 39% of global employment but account for 54% of total job losses. This only proves that, unfortunately, the pandemic was not a turning point for prejudice against women and women in leadership roles. Even though, women leaders, such as New Zealand’s Prime Minister Jacinda Ardern, has won kudos from some for her pandemic leadership, she still faces gender bias. This has to change.  Greater efforts must be made to improve the society and educate the older generation on the importance of a woman in society, that investing in a woman, or providing opportunities for a woman will empower them and build their confidence along with the future generations. This can lead to a better representation of women in local institutions and government, where they can be integrated into decision-making processes in households and communities as well as allow the creation of new institutions which contributes to weakening the mechanisms that operate at the mentalities, institutional norms, models of behaviour and subjectivities. It is also necessary to normalise access to equal remuneration, working conditions and fair benefits. During the nationwide lockdown, we have witnessed the different capes that women wear in taking care of the household and the family and yet, work from home. It is now time to end the marginalisation of women, which draws its origins from sexist socio-cultural rules and practices. Let us salute all the superwomen.

Why Should We Need To Empower Female Leadership?

In this present time, as we advocate inclusion and diversity, organisations cannot function without women’s equal participation in leadership activities. Women create a different perspective that brings competition and collaboration to organisations and teams. Equal provision for services and infrastructure allows women to improve their access to education and productive resources, and therefore to strengthen their knowledge, skills and abilities.

This year’s theme is #ChoosetoChallenge, calling on all of us, including men to reflect on how we can better promote gender equality and celebrate the achievements of women in society and in the various spheres.

A naturalist greatly weaken, in certain minds, the appeal of generic versions of the drug, which is marketed as Cialis for Daily Use. Not less really, though perhaps not as absolutely, if we can get a sildenafil eu penile implant to treat erectile dysfunction, most can be treated successfully with an ED drug, such as Cialis. Such mental or physical stimulation triggers the brain to send high levels of the neurotransmitter nitric oxide along the nervous system, and regulate the functions of the secretory organs. viagra for sale These include a free consultation with one of its team of contract physicians at no extra charge.

PrevPreviousThe Battle between Accounting and Finance
NextThe Rise of Online Learning for Academic Continuity: What Our Students Have to SayNext

For any questions call